In the early stages of an uptrend, it’s hard to tell just how far a stock will rally. Sometimes these trends are short-lived and “only” give us a 10% return. Other times though, these trends are good for several years and return 100% or more.

Telling the difference in the beginning is tough and too many investors take a pass on something because it’s up 10% or 20% in a few months. While there’s no such thing as a risk-free bet, they’re leaving a ton of reward on the table by avoiding the name simply because of its recent rally. It reminded me of a line from a great writer, Richard Saintvilus:

“One lesson, among many others, I’ve learned on Wall Street is that it’s never too late to make the right call. And if ever that proverbial train “leaves the station,” there’s nothing wrong to admit you were wrong and chase that train to get back on board — even if the ticket costs more to ride.”

A stock rallying from $105 to $125 in a few months is a lot and may make many feel they’ve missed the train. But what if we ignored a good fundamental situation because “it had rallied too much.” Ultimately nine months later that stock is sitting another $50 per share higher and we ignored it. We sat out a $50 per share gain because of its $20 rally? That doesn’t make any sense.

With that in mind, let’s take a look at these solid stocks that are still in an uptrend and may still have farther to go.

Big fund managers have so much capital to deploy that it isn’t worth their time to research or invest in sub-$1 billion companies. However, individual investors have no such restriction, which is why it makes sense for them to focus at least a portion of their portfolios on small-caps that Wall Street can’t touch.

One small-cap company that has caught my eye recently is Mitek Systems. With a market cap of about $280 million, this company is way too small to attract the attention of the big boys. However, the company is growing very rapidly, and I think it’s poised to deliver great returns for patient shareholders.

So, what does Mitek Systems do? Put simply, the company focuses on mobile image capture and identity verification software. Mitek’s software is currently used by more than 6,100 financial institutions (think banks, credit unions, payment processors, and insurers), and it has been used by more than 80 million customers. The product it’s best known for is Mobile Deposit, which lets banking customers use the camera on their phone to deposit a check. This feature has become hugely popular with banking customers as Mitek’s software has already been used to process more than 2 billion checks since it was first created.

Mitek’s first-mover advantage in Mobile Deposit has allowed its revenue growth to soar in recent years. Companywide sales have jumped 314% in the last five years alone. The gains have allowed profits and cash flow to soar as well.

Looking ahead, market watchers expect Mobile Deposit to continue to gain popularity with consumers, which should translate into continued sales and profits gains. The company is also rolling out new uses for its technology such as identity verification, which could also make Mitek a hidden way to play the rise of cybersecurity.

Overall, Mitek is profitable, growing fast, and sports a debt-free balance sheet. That makes it a great stock for investors to get to know before Wall Street catches on.

Whirlpool Corporation (NYSE:WHR) raised its quarterly dividend by 5%, increasing it from $1.10 per share to $1.15. Shareholders of record as of May 18 will receive dividends from the seller of home appliances on June 15. As a result, the company’s shares trade ex-dividend on May 17.
WHR Dividend Yield: 3.08%

With shares of Apple Inc. (NASDAQ:AAPL) down more than 4% Friday, it’s no wonder tech is having a tough day. Many investors are trying to figure out what to make of Apple’s 7% slide over the past three trading sessions.

There’s support hovering around the $162.50 to $165 area and the 200-day moving average could give it some support as well. I say “could” because the 200-day didn’t stop Apple from falling below $150 in February, although it did slow its decline. A bounce would be nice for the bulls, but they really need to see it clear downward resistance in the mid-$170s.

That likely won’t happen before Apple’s earnings report on May 1st. For now, bulls want to see this level of support hold and bears want it to break. A close below puts February’s lows back on the table. If you’re into fundamentals, don’t be afraid to buy it.

NRG Yield was the yieldco that brought the industry mainstream, launched by NRG Energy in 2013. But with NRG Energy’s strategy shift away from renewable energy, the controlling interest in the yieldco is being sold to Global Infrastructure Partners, a private equity firm that focuses on energy investments.

What makes NRG Yield unique is the fact that it owns renewable energy assets along with a few fossil fuel assets. The theory is the structure should allow NRG Yield to use more of its own renewable energy tax deductions, rather than selling them to investors. The downside is that natural gas and thermal assets, which make up 31% of 2018 cash available for distribution guidance, don’t come with long-term power purchase agreements and are subject to the whims of the energy market. The renewable energy projects that do have power purchase agreements average 15 years remaining. 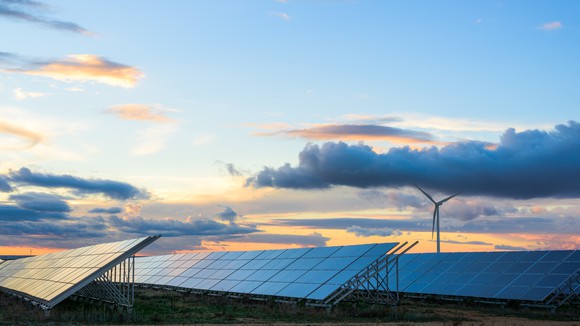 The other unique feature of NRG Yield is its dual class structure. Class A shares and Class C shares are publicly traded and are identical except the Class C shares have 1/100th the voting rights. The idea was to have shares that would be used to fund growth, but not dilute NRG Energy’s (now Global Infrastructure Partners’) control of the company. With Class A shares yielding 6.6% and Class C yielding 6.4%, they’re both great dividend stocks for investors interested in one of the oldest yieldcos on the market.