Nope. Nothing really. It is more a measure of inflation and economic growth, and far more psychological than it is a real indicator of something significant.

But the kernel of truth that it does represent is a new stage of growth in the economy. The big, safe stocks will keep chugging along, but smaller companies can grow faster than big ones in a faster-paced economy.

That means asset managers — and smart individual investors — will start moving money into small- and mid-cap stocks to take advantage of accelerating growth.

Below are 10 little-known stocks that could be huge in coming years, and now is a good time to establish a foothold, while they’re still cheap and relatively undiscovered. Just remember, these stocks will be volatile, so don’t expect a smooth ride.

It might be tempting to think that the iPhone is Apple’s swan song and dismiss the company as a has-been, and many investors have long predicted just that. Some have even foretold the death of the iPhone 10, but that ignores the reality.

In the recent earnings release, Apple reported second-quarter records for both revenue and earnings, and Apple CEO Tim Cook said "Customers chose iPhone X more than any other iPhone each week in the March quarter, just as they did following its launch in the December quarter." The company set all-time record sales from the App Store, Apple Music, iCloud, and Apple Pay. The company will likely achieve Cook’s goal of doubling revenue from Apple’s services segment by 2020.

Berkshire Hathaway CEO Warren Buffett, one of the world’s most followed investors, signaled his faith in the company when it was revealed that he had purchased a massive 75 million Apple shares over the past quarter, in addition to the 165 million shares already owned, increasing his stake in the iPhone maker to about 5% of the company’s shares.

Buffett scoffed at the thought of grading the company based on how many phones it sold in a quarter, saying:

Nobody buys a farm based on whether they think it’s going to rain next year or not. They buy it because they think it’s a good investment over 10 or 20 years … The idea of spending loads of time trying to guess how many iPhone X … are going to be sold in a given three month period, to me, it totally misses the point.

This is a clear indication that Buffet believes that Apple will be a solid investment for decades.

Other reasons to like the company abound. The company raised its quarterly dividend by 16% to $0.73 per share, which is funded by less than 25% of Apple’s profits. The company also announced a new $100 billion share buyback. At current prices, this could reduce Apple’s share count by an additional 10%.

Finally, there’s Apple’s valuation. Even after the stock’s recent run-up, it sells for just 18 times trailing earnings, far below the 25 times for the S&P 500.

A compelling valuation, a solid and growing dividend, significant share buybacks and record-setting results all show why Apple is positioned to grow for the next 50 years.

But don’t take our word for it. Ask Warren Buffett.

Hewlett Packard Enterprise is an integrated systems company focused on enterprise offerings like IT solutions, servers, and cloud-based products. The old Hewlett Packard Company might have been more of a “blue chip” by definition, but the spinoff has created new efficiencies for HPE, and investors are getting on board with this Zacks Rank #2 (Buy) stock right now.

HPE currently sports a “B” grade for Value in our Style Scores System, and its P/E, PEG, and P/B ratios all trade at significant discounts compared to its industry. Analysts are also calling for HPE to post EPS growth of 46% in the current fiscal year, and its latest estimates have been trending higher. 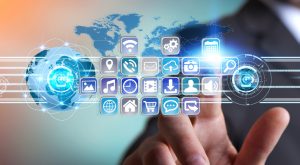 Mastech Digital Inc (NYSEAMERICAN:MHH) is up 67% year to date and has a market cap of a mere $92 million.

MHH is a 21st century version of a temp firm. It’s a temp firm to IT personnel.

The thing is, millennials and Gen Zers are not looking to be the kind of 9-5 employees that previous generations considered the way to go about a career position.

Coders, devs, systems admins, etc. don’t see systems in a 9-5 world. The tech world is 24/7, so when they work is more flexible and not as predictable. They work around the tech. And that makes Mastech a great draw for talent as well as clients. Plus, many of these jobs are high paying, so Mastech has great margins, since it’s not trying to sell desk jockeys or maintenance workers.

The company said that for its first quarter, earnings came in at $2.68 per share, or $2.79 per share on an adjusted basis. Analysts were calling for adjusted earnings of 48 cents per share.

From a revenue standpoint, Celanese also impressed, bringing in $1.85 billion for its first quarter, marking a 26% increase compared to the year-ago period. The Wall Street consensus estimate projected revenue of $1.66 billion.

The company’s Engineered Materials segment posted net sales of $665 million for the period, 29% higher than in the year-ago quarter. Both GAAP operating profit of $127 million and segment income of $182 million were all-time highs.

“The on-going success in our businesses gives us confidence that we can grow adjusted earnings per share by 20-25 percent in 2018,” said Mark Rohr, Celanese chairman and CEO.

CE stock was up about 5.7% after the bell today.

Even in a sector filled with concerns, and despite having over $4 per share on the balance sheet, Buckle Inc (NYSE:BKE) looks like one of the riskiest plays in retail.

The company is heavily exposed to the tough mall space, with 84% of its locations in shopping malls, per figures from the 10-K. Revenue and earnings are headed in the wrong direction. And as a result, shorts have targeted the stock. A whopping one-third of the float (though closer to 21% of shares outstanding) is sold short at the moment.

With BKE now having more than doubled from its 52-week low, the stock looks dangerous from here, particularly ahead of Q1 earnings this month. But for investors who see the retail sector as oversold, those characteristics all make BKE an intriguing play at this point. A strong Q1 report could squeeze those shorts. Easy comparisons could help growth this year.

And even after the gains over the past year, BKE remains cheap. Backing out its cash, it trades at about 11x EPS. I’d personally rather own FL or other retailers on this list. However, investors more bullish on retail may see it very differently.

And if those investors are right, the short float and recent underperformance suggest BKE may have the most upside of any retail stock on this list.